Journalists of the future 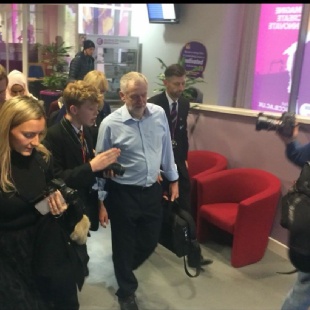 Two of our Year 10 students spent a day getting some hands on work experience in the field of journalism.

You can read the Schoolsweek article about their day by clicking here.

You can read articles by Emilly and Luke below.

We returned to the AOC hall and listened to Corbyn give a talk and be interviewed by Steph, amongst two other guests, including the head of Ofsted and the CEO of AOC. The trip was an amazing experience and I wish I could’ve gone for the second day, nevertheless it was a magical experience and I felt I knew much more about journalism than I had no less than a day before. 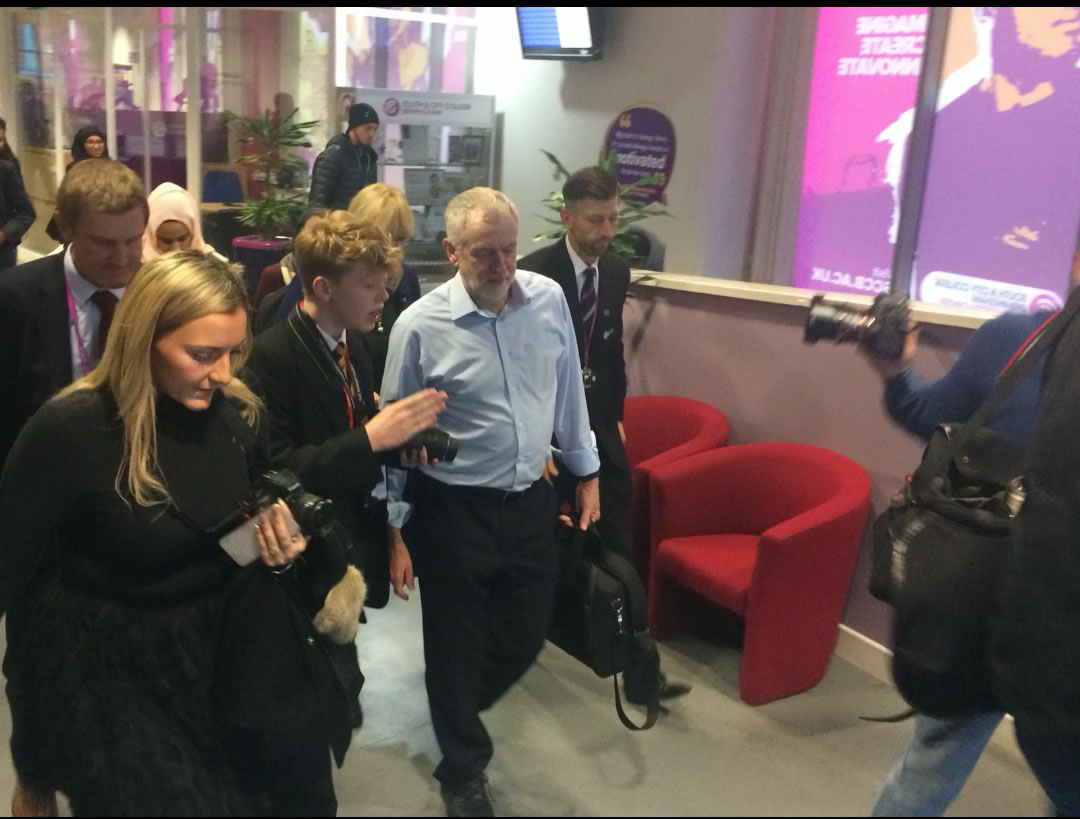 Our visit to the AOC conference was a truly enlightening experience into the world of journalism, we were lucky enough to be able to experience the reality of the job and the fact that sometimes you have work hard to get quotes and interviews from people.

The day started off with us entering the AOC conference to witness Ann Milton, the further education minister’s, speech about further education as well as an interview by Steph McGovern from the BBC. This was a taste of the kind of relationship that the government’s representatives have with their respective industries as there seemed to be a lot of criticisms addressed to the empty promises, out-of-touchness and misguided focus by the FE minister; as we learned through the vox pops. The vox pops were interesting because it allowed us to both see some of the opinions of those that were involved in the industry and showed us how newspapers get opinions whilst staying factual. We also got some insightful career advice from the BBC correspondent and the interviewer for the entire conference, Steph McGovern.

Next, we headed over to an FE college where Jeremy Corbyn was scheduled to speak, due in part to the fact that he attended it for a brief amount of time, as he told us. We helped interview the head of the college, I mostly took pictures but Emilly was more involved in the interview. Corbyn gave a speech about further education and the labour party and had a question segment where he answered questions on a variety of topics. Whilst he was leaving, in the true fashion of a journalist, I sneaked in. We had a conversation about the political position of the labour party and whether he thought a more regularly elected centrist labour was better than a large policy pushing hard left labour. We spent a portion deciding on the definition of a “hard left” labour, in short, he thought a labour with socialist values and motives was important. However short the conversation was I enjoyed every second of it, the nature of the question meant it could not have been answered thoroughly in such a short period of time but it was nice to be able to ask something that he might have thought about even after he has left. A question that leaves you questioning your own values even if they are set is rare, but, can end up giving you a completely different view on every part of life.

A dilemma: Jeremy Corbyn or Education? Both?

An Insight into Journalism, Jeremy Corbyn's Admirable Connection with The Youth of Britain, Meeting Steph from Breakfast, Tweeting and Vox Pops

It is simple really- when given the opportunity to make the acquaintance of Mr Jeremy Corbyn, there is no opposing argument (even if it does result in absence for the entirety of a school day). Therefore, when approached by FE Week for a day of journalism work experience at the AoC Conference (and after the so generous offering of time with Jeremy Corbyn), I agreed. Who wouldn't?

Therefore, on the morning of Tuesday 14th November, I travelled from London to Birmingham alongside Catherine Murray (a journalist from FE Week reporting on the Conference) and her son, Luke StClair- a Year 10 student, like myself, at Southfields Academy. Despite the early hours, we both found that the excitement was almost unbearable; there was a distinct itch as we approached the city, an adrenaline rush of butterflies and light headedness -which the train could not be held accountable for. Train sickness matters little when anticipation has done all the prior work.

And so, Luke and I sat, restless, for an hour and a half, his mum in the seat ahead - as is the usual with journalists - all business, and yet still the epitome of relaxation. We waited - discussing the day ahead, reading and highlighting texts so that we were aware of what the event was about, doing a cheeky bit of homework (because, clearly, school follows us wherever we go)- and waited.
When we finally arrived in Birmingham, the conversation flipped, surprisingly, onto the topic Christmas (due to the setting up of a Christmas fair beside the venue), and, subsequently, religion. There are only two ways a conversation like that can end -either through a further disagreement over sport, or a further disagreement over politics. (A disagreement nonetheless.) What do three leftists eventually end up talking about? Labour; Corbyn. So, ironically, as we approached the Conference at which we would hear the aforementioned politician speak, we spoke of nothing but his strategies (as you do, of course).

Inside the conference, we found two things -fancy people and fancy advertisements. Also, handshakes; a lot of handshakes. After leaving our things in an allocated 'Media Suite', we located the hall in which the first speaker (Anne Milton) would be addressing the topic of conversation- T-Levels, Colleges, Further Education and the requirement (or lack thereof) for Maths and English GCSEs when going into a vocational path of work.

This was our (mine and Luke's) first experience of a conference; and how did we spend it? Tweeting. Oh, teenagers, how dare they? Now, consider this - we were asked to tweet about the event using the hashtag (which, due to our contribution, trended nationally). Who knew that journalism consisted of social media? Aside from Jeremy Corbyn, this was the highlight of the day for me.

After Anne Milton (and an amazing address by Matthew Syed), we had short, one minute interviews with the people at the event - these are called vox pops. Our question to a total of 11 people was - 'if you had one minute with Anne Milton, what would you say?' Halfway through this task, we approached Steph McGovern, from BBC Breakfast, with whom we had a prolonged conversation, talking about interests and what to do to raise employability. A couple of pictures (and some amazing advice) later, we returned to the task of statements.
After lots of eye contact, nodding, smiling, holding recording devices close to people's mouths, and a lot more handshakes, Luke and I were given the task of taking down all the recordings of everything they said, word for word.

Later, (after lunch) we walked to South & City College in preparation for an interview with the Principal, and a Jeremy Corbyn Q&A session. After showing us the music department of the school, Mike Hopkins sat down with us for a 30 minute interview, during which we discussed their women campus, the type of students that they take and the importance of his personal involvement with his pupil's learning.

Corbyn arrived around five minutes after the interview had finished, greeted with claps and chants of "Oh, Jeremy Corbyn"; like the humble man he is, he simply smiled and waved, and walked along (a crowd of people following behind him). As Corbyn disappeared for a few minutes, we situated ourselves at the back of the room where we waited for the session to begin. Again, during his introduction, Corbyn stepped to the front to the soundtrack of applause.

He received questions, and he spoke directly to those who asked the questions. After twenty-five minutes of this routine, he stepped into the crowd of students and sat beside two girls (who, as expected of teenagers, attempted to take selfies with him -which he gladly accepted). He looked around for a few seconds, and clapping (as is always the case with Corbyn) began. To this sound, he stood, and smiled, and opened his arms (almost like a political Jesus), and pointed at us all- his expression was largely one of "don't applaud me, praise yourselves - you're the reason why we're all here".

He made his way out (after being bombarded with people ahead of him who decided that they were going to try to take a selfie with him, even if he wasn't looking at the camera), followed once again by a crowd of people. During the duration of his walk to the car (which was around a minute) Luke managed to sneak in front of the crowd and ask him a question, to which he gave a very diplomatic answer, as expected.

As Corbyn made his way back to the conference by car, already late after spending too long with the young people, Luke, his mum and I walked back, speeding so that we were prepared for his speech, which commenced a few minutes after we arrived back there. His speech was, amongst many things, extremely amazing. I tweeted 90% of what he said. After he was questioned by Steph McGovern, he left the stage, once again, to a round of applause. Two other speeches followed, by Amanda Spielman (head of Ofsted) and David Hughes, both of which were also, in their own respects very good (including the parody of 'Jolene' at the end of Hughes' speech).
After a long day of pretending to be journalists, we made our way back to the trains (once again discussing Corbyn). Despite the amazing experience (seeing Corbyn in action amongst those he wishes to work for, meeting one of the most famous journalists in Britain, interviewing people for quotes and tweeting about the event in a professional way), I decided that journalism is not the career path for me, although it has some major perks - the opportunity to meet Corbyn, for example.